As a tourist to India I recommend trying out our most famous Indian sweet the JALEBI. Jalebi is a famous Indian dessert, prepared by deep frying batter in coil shape and then dipping it in sweet syrup. Jalebi is so very popular that it’s eaten during national holidays, weddings, festivals and other important occasions.

The name Jalebi originated from ancient Sanskrit word Jalvallika, meaning full of water (which is in fact is thick sugar syrup). Some believe that the Jalebis originated in West Asia, where it was known as “zoolabiya” or “zulubiya” and then was adopted by the Indians, though there is not much evidence to substantiate this claim. There is no word for Jalebi in English.

It is amazing to know that Jalebi is used as a cure for headaches and cold in northern India and Pakistan when taken along with warm milk, which also helps to deal well with biting cold in the winter. During fairs which take place in India, one can watch the vendor making Jalebis for the crowd.

Texture and Taste of Jalebi

The prefect Jalebi is crisp on the exterior, with a soft chewy texture inside which is filled with sugary sticky syrup. A Jalebi that has been left in the sugar syrup for more than required time turns soggy and loses its taste. Some people prefer sprinkling the syrup on the sweet instead of dipping it in the syrup which is known as “sheera” or “chaasni” in the local dialect which gives it a crystallized sugar coating. 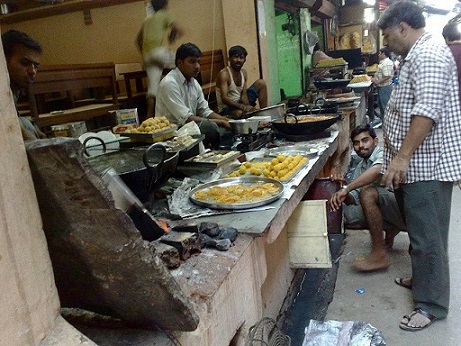 Jalebis are prepared with various ingredients like using gram flour, split black gram flour, maida or all purpose flour, wheat flour, rice flour and rarely semolina for preparing batter. Other ingredients may include lime juice or sour curd to give for introducing a bit of tanginess into the sweet, the sugar for syrup, baking powder, saffron, powdered cardamom, rose water, and oil or ghee for frying. There is no need to use artificial flavor or color for the sweet, because it turns out in bright yellow color with mouth watering flavor with the natural ingredients used in preparation of jalebi.

Many may feel that process of making a jalebi is very complicated, where as the fact is that it is quite easy to make if you learn few basic techniques like preparing the right consistency for the batter, pouring the jalebi in spiral shapes and dipping in the sugar syrup.

The sweet is prepared by mixing the chosen flour and other ingredients into a batter that can be poured easily. Whisk the flour in a large bowl adding yogurt (or lime) with required amount of water to form a smooth paste without any lumps. Ferment the mixed batter for at least a day. Beat the fermented batter once again with hands or a whisker at low speed for some time.  Heat pure Ghee or oil in a pan on medium heat. Pour the batter into a cloth which has a hole to allow the batter to pass through it. With a special technique perfected by practice, the jalebis are poured into hot oil in spiral shapes through a cloth with a hole in it and turn them occasionally to cook them evenly on both the sides. The technique is similar to using icing to decorate a cake. The spiral deep fried jalebis are then dipped into the separately prepared and cooled sugar syrup and removed immediately to prevent the jalebis from turning soggy. The syrup is prepared cooking sugar in water to form one thread string consistency. Usually some milk is added to the syrup and the scum discarded when it rises to the top. Saffron is added for flavor, color and taste. Though many enjoy the sweet just as it is, some prefer it with other dishes like ice-creams, Rabri, milk etc.

Where to Buy Jalebis?

Jalebis can be bought at any local sweet shops scattered across every city, town and village of India. The cost of Jalebi’s can vary from Rs.50/k.g. to 500/k.g. depending on the ingredients, locality and popularity of the sweet shop.  Jalebis are reasonably priced at many shops which has earned its fame as the sweet of poor. With the era of internet shopping, these jalebi’s are also available to buy online. If you want you can get an instant jalebi recipe pack from your local Indian store.

Chandni Chowk in Delhi is one of the famous places renowned for traditional jalebiwala’s who prepare exotic jalebis which are sought after by tourists. The jalebis of Sadar Bazaar (Agra) in UP are also famed for its unique taste, which people often bet cannot be found anywhere else.

Is it safe to eat? Absolutely! If eaten fresh it should be safe. The intense heat of the oil should kill any bacteria if there is any.