Can elephants swim? Yes they can. They are known to be good swimmers. New evidence suggests that elephants may have evolved from sea creatures. The discovery of “nephrostome” in elephant foetuses similar to what is found in freshwater fish, frogs and egg laying reptiles suggests that they have common ancestry. The ancestors of the modern elephant went through a variety of harsh environments and were able to evolve to environmental changes quite fast. This gave them remarkable physical and mental agility.

Swimming elephants of the Andaman

It is thought that elephants from were able to swim between Sri Lanka and India before they were inhabited by human beings. If you want to see an elephant swim then you must come to the Andaman Islands in the Bay of Bengal, Northeast part of the Indian Ocean. In these ocean archipelagic islands, until 2002 when logging was banned, loggers have used elephants to transport felled trees from one island to another using elephants as transport vessels. It’s absolutely amazing how these elephants were able to carry out these strenuous works and support the construction industry on the islands. 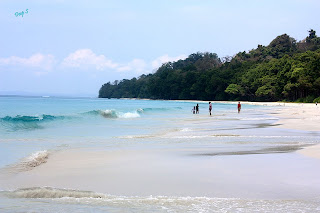 Rajan is an elephant who can swim and perhaps one of the friendliest elephant you will meet. Born in the 1950’s in India, he was made to work hard and had to undergo cruel training regimes. He was brought to the Andaman Islands to work in the timber industry and made to swim from island to island transporting timber. During his early years of his life, remained in captivity and worked for timber companies. He even met his girlfriend who originally taught him to dive and go scuba diving. Both elephants would walk side by side into the ocean every evening to play and go swimming. She remained with him for 20 years. She unfortunately died when bitten by a cobra. The story is that he was heartbroken.

When logging was banned on the islands in 2002, many elephants were retuned back to the Indian mainland. However, some remained and Rajan was one of them. Rajan stayed on the islands where he was taken to the “Barefoot beach and resort” at Havelock Island by his rich owner who was not willing to part with his amazing elephant who could swim.

Rajan is now cared by a special elephant carer called the “Mahout”. He continues to live on the island and enjoy his life swimming in the beautiful sea and eating the tropical fruits the island has to offer. Now around 60 years of age, he still can stay afloat and swim without any problems and the tourists love him for that. He is perhaps one of the most photographed swimming elephant in the world.

If you want to see Rajan and even swim alongside him, here’s how to get to him at Havelock Island. The Andaman Islands is a part of large group of 600 Indian islands in the Bay of Bengal. Port Blair is the capital of the Andaman Islands and is the first port of call for tourists. Non-Indians will require a “Restricted Area Permit” to visit the islands; however 30-day permits are issued on arrival at the Port Blair airport for those with Indian visas.

You can get to Port Blair by taking a ship from Kolkata (Calcutta), Chennai (Madras) or Visakhapatnam and will take 4 days. 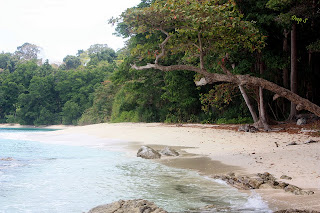 The best way to reach Port Blair is by air from Kolkata and Chennai airports. Airlines flying are;

There are tourist ferries between the islands operated by the Indian Directorate of Shipping Services (DSS) from Port Blair to Havelock Island. There are huge demands for these tours especially in the peak season therefore it’s best to book your tickets several days’ in advance through travel agents or directly at Port Blair’s harbour or Port Blair ferry office on arrival.

Apart from the Government-operated ferries, there are private helicopter flights to Havelock Island such as the “Pawan Hans” that operates 8-seater Cessna seaplanes from Port Blair to Havelock Island and back every day except on Sundays.

22 thoughts on “The swimming elephant of the Andaman Islands, India”